Let’s start with a brief explanation of the basics of the cartridge and its principle parts:

Cartridge body – this is the outer shell and the basic construction, in short, what we sometimes refer to as the needle. It consists of the top of the outer shell or casing which can be made of different materials, but more often than not it is made of a hard plastic, metal or alloys on more expensive units like the majority of moving coils, wood and also various types of stone, e.g. crystals or agates. In certain cases the outer body is done away with partially or completely on purpose as the shell can store energy or add to the weight unnecessarily. The top of the body is usually flat and has mounting spaces or holes where the screws will attach the body to the arm’s headshell or mounting surface. The body generally protects and covers the innards, which consist of the wiring to the cartridge pins.

b.Cartridge pins – these are mounted on the back of the cartridge and will have the tone arm wiring leads attached to them to transfer the signal from the cartridge to the amplifier.

Generator assembly – this is literally the motor of the cartridge and has the cantilever attached to it (pointing outwards and down at an angle away from the assembly), and will have either magnets or coils attached to it, depending on the type of cartridge design. The generator assembly is responsible for generating an output voltage which is then converted into sound through the amplifier and ultimately through the speakers.
Cantilever – this is an elongated pipe or solid rod that points forward and has free movement so that the stylus can move as it is activated by the groove and the shape of the groove walls. Most cantilevers are made from aluminium or Boron. Some very expensive models have ruby, diamond, beryllium or carbon fiber cantilevers and are chosen for their exceptional stiffness.
Stylus – this is the tip that is found on the end of the cantilever and is usually of diamond. The stylus is responsible for following the groove and “extracting” the information contained in the groove walls due to the movement that ensues when the record rotates. The stylus can be bonded onto the cantilever with glue, or press-fitted into the material of the cantilever.

i. Types of cartridges

There are two main types of cartridges available. The most common type is the Moving Magnet type, and then, generally more advanced, Moving Coil. Both units generate sound through the process of their movement within the groove wall, but the manner in which they generate through different materials and processes differs.

In such a design the cantilever has a small magnet (or two) attached to it permanently. The magnet is positioned between two sets of fixed coils. Thus a tiny electromagnetic generator is formed. When the magnet vibrates due to movement generated by the stylus following the groove, a tiny current is generated in the coils. The magnet is small and has little mass and is not coupled mechanically to the generator. This allows the stylus to follow the groove more faithfully and requires less tracking force. 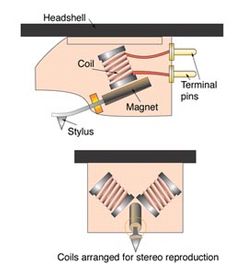 The majority of MM cartridges share the same loading at 47 kOhm and have fairly similar output voltages ranging from roughly 4 to 5mV. In general the MM option input on an amplifier or separate phono stage will accept a wide variety of MM cartridges without any problem. There are more advanced phono stages that can give precise input and matching options, but generally even fairly expensive phono stages will have similar MM loading options.

(Please note that there is a sub-category – Moving Iron and induced magnet types have the magnet fixed and move a piece of iron or other ferrous alloy in the field of the magnet to produce the signal within the fixed coils. Although technically not correct the industry does tend to also include them under the general MM category).

This design is also a tiny electromagnetic generator, but differs in as far as the coils are attached to the stylus/cantilever assembly. These coils then move within the field of a permanent magnet. The coils are really tiny and wound very extremely fine wire, so are even lighter and smaller than the small magnet used in an MM cartridge. This further improves the tracking ability of the cartridge. This is turn gives extended frequency response and greater fidelity.

The disadvantage of the MC design is that it only generates a very much lower output voltage and therefore requires a really good preamplifier circuit which can manage noise levels and hum problems far better than an MM stage. It is not possible to generate similar levels of output to an MM as the coils would have to be wound to a level that would create a bulky and unmanageable cartridge body size. The nature of this very low voltage is also more susceptible to noise and external interference.
MC cartridges are small and very fine precision instruments and are generally expensive but audiophiles prefer their sound quality due to the better performance levels.

ii. Deviations/different designs to the norm

The main deviations here are stipulated as follows:

This is a design that was made possible by Bang & Olufsen, and patented by them. It made use of a special mounting and is a moving iron design. Magnets and coils are stationary while the micro cross moves within the cantilever, thereby varying the distances between the arms of the cross and the magnets. It was claimed that the MMC design gave better channel separation since each channel’s movement appears on a separate axis.

This was a unique design, with fixed magnets and coils. The stylus shaft was composed of the diamond tip, a short piece of soft iron, and an L-shaped cantilever made of non-magnetic steel. Since the iron was placed very close to the tip (within 1mm), the motions of the tip could be tracked very accurately. Decca engineers called this “positive scanning”. Vertical and lateral compliance was controlled by the shape and thickness of the cantilever. Decca cartridges had a reputation for being very musical, however early versions required more tracking force than competitive designs. This made record wear a concern.

iii. Models
We sell the entire range of Ortofon cartridges and accessories. Currently Ortofon have one of the most comprehensive ranges of cartridges available and their products span the entry level right up to the absolute high end arena. Ortofon is also often the choice of discerning manufacturers to partner their turntables when quality or budget is a consideration. With a wide range of models and different price points to choose from it is easy to find a cartridge that works efficiently and properly in everybody’s system. Shown below are one of Ortofon’s entry-level models and also their flagship model. The models are the OM5E (MM), and the MC Anna.

Compliance in general parlance is the ability of materials to bend or conform to movement from certain stimuli. In turntable-speak this is the general suitability of the cartridge and the movement of its cantilever in relation to the cartridge body and the arm and the interaction therewith. There really is only one basic rule – high compliancy cartridges should generally be matched to low mass arms, and low compliancy cartridges should generally be matched to high mass arms.

If the cartridge is a high compliancy design it simply means that a very heavy arm will create too much movement and the cantilever will experience difficulty in control and movement as it will be pushed around excessively by the heavy mass. This means that the cantilever will be moving past its normal limits and will start to miss-track and not follow the groove properly at all times. Conversely if the arm is too light and the cartridge is not very compliant, the cartridge will literally have a similar problem in bulldozing its way around the groove in general. Either way, the groove will not be tracked properly and the sound will suffer accordingly. If in doubt about compliancy of the cartridge, please let an expert advise you regarding the exact arm and matching it to a specific cartridge.

The most basic stylus shape is the conical or round shape. More advanced stylus shapes are generally elliptical and at the very top of the hierarchy are the hyper-elliptical shapes and derivatives thereof. The reason why stylus shapes differ has more to do with budget and application than anything else. Conical shapes are the cheapest to manufacture and also the easiest to mount in or on the cantilever material. Unfortunately the shape of the stylus is prone to cause more wear and tear as the section of the stylus profile’s side that actually touches the groove wall is not spread out over a larger area. Have a look at the following images – the first image shows the stresses caused by the conical stylus and the stresses over a small area, as opposed to the elliptical shape on the right where the elliptical stylus spreads the pressure over a larger area. The second image also clearly shows the actual elliptical profile under magnification.

vi. Suitability and budget
It should follow from the above discussion that due to the complexity of the manufacturing process and the big difference in materials that the cost of cartridges can differ quite dramatically. Although there is a very definite hierarchy and priority order to turntables, with the motor being more important than the arm, and the arm being more important than the cartridge, having to be adhered to to get the best performance from the turntable as a working whole, it certainly stands to reason that there is bound to be a very clear and marked performance increase if a new and better cartridge is used. If you are in any doubt the suitability of a cartridge to the turntable in general, or the arm and interaction specifically, please do not hesitate to contact your specialist dealer. The whole principle involved in getting the system to work is one of balance and common sense. It does not make much sense to get a cartridge that is too expensive if the turntable does not warrant it, conversely, it does not make sense to place a really cheap budget cartridge on a deserving high end turntable.

In our next installment we will be looking at the actual fuel that turntables run on – records!