By now everybody understands the route that the signal needs to travel from the groove and its origin right through to the loudspeakers to eventually hear sound and react to it. However, the process of getting that tiny little signal from one point of the journey to its ultimate conclusion is not a simple one. If you had to place your ear quite close to the cartridge and listen to the sound at the point of origin in the groove, you would hear a thin and tinny signal with very little fullness or body to it. Obviously what we hear is not remotely the same. We hear a nicely rounded and full-bodied signal from the loudspeakers. It stands to reason that we need to boost the level of that tiny original signal to a level that is easy to hear. So the signal needs to be manipulated in such a manner that we can hear it without any strain.

Boosting or amplifying this signal is done with a separate circuit called a phono preamplification circuit. The typical output voltage of a cartridge is much lower than other source components and needs additional amplification, probably as much as ten times a conventional device like a CD player, tuner or cassette deck. Plugging a turntable into a conventional amplifier that has not been equipped with a specific input labeled PHONO but rather an AUX input will not solve the problem. Only a very low audio output will be heard and will most likely be accompanied by a lot of hiss and noise.

So understandably the amplifier needs to be equipped with the phono amplification on board. This input caters exclusively for turntables and will boost the signal to an acceptable level so that it can be heard as a similar output level and volume to other source components. It is usually two RCA female inputs with a separate screw in the direct vicinity of these two plugs to ground the earth wire onto, so that the turntable does not create and cause audible hum. The minimum standard of such an input will be a normal Moving Magnet input (also often labeled MM), and will be a standard load of 47 kOhm. In certain cases there will be two options, where the MM is also supported with a Moving Coil (MC) option, where more advanced and better quality units can also be catered for. Usually the amount of gain and boost is more for MC cartridges as their output is usually even lower than MM cartridges (please note that we will be covering the difference and more specifics on the two general cartridge types in greater detail in a later part of this series). If the amplifier makes provision for both types of cartridges the selection of the appropriate unit will sometimes be on the front fascia of the amplifier, sometimes on the back. In certain instances this selection process can be on the internal phono circuit board or module, with selection being made either by a series of dip switches or even with little manual bridges or jumpers. On certain more advanced units there will also even be settings for more specific gain and load settings. Shown here are two examples, the first is of the Marantz PM7003 with the back panel and the connections of the RCA and ground screw, and the second of the Marantz KI Pearl with the front panel and the MC button selected with blue backlit LED:

In many cases amplifiers have not been fitted with a standard on-board phono stage, and in such cases a separate phono amplifier can be inserted between the turntable itself and the recipient amplifier. Due to certain cost constraints and budgets available when certain amplifiers are manufactured, phono amplifiers are very often omitted. In recent years phono circuits have returned due to the resurgence of the vinyl market, but there are many instances where they certainly are not available. There are many manufacturers that build and supply a variety of phono amplifiers as an aftermarket accessory and in the majority of cases the have a variety available from very affordable to the sky-is-the-limit. The differences that exist between very basic turntables and very advanced turntables require a wide range of phono amplifiers. They come in packages of all kinds and sometimes have beautiful aesthetics and design, and also brilliant execution in high quality materials. Generally the shape will be fairly basic as it is not always a device that needs to be accessed or manipulated to a great degree. It is fairly passive in its role and can also be hidden out of sight if so required.

There is a secondary and much more important function that the phono amplifier needs to fulfill. In addition to the boosting of the signal, the equalization of the signal also needs to be done. This is a crucial aspect of its function. If this equalization was not performed the sound would be loud enough but would sound very bright with no bass at all. The reason for this is very interesting – the grooves that one finds on records are cut with a cutter head when the original recordings are played back to produce the original master. It is necessary to limit the groove width of low frequency sounds (as they move very wide from side to side, thus taking up a lot of space on the record surface), as opposed to the relatively narrow width of high frequency sounds. If the wide modulations can be made less so, and the high frequencies too, there is obviously much more space available on the record. So equalization is performed off the original recording where bass is physically reduced and high frequency increased prior to the cutter head creating the groove from which the vinyl stampers will be made. During the playback action the sound must then be returned to its original state, with bass added by equalization and the high frequency reduced in the same manner. This process is a standardized process and is called the RIAA equalization curve. Preset values for all the frequencies are pre-programmed into the phono devices so that what you hear on playback sounds normal. (The RIAA is the abbreviation for the Recording Industry Association of America, who has been governing recorded sound since 1954. Prior to then and from around 1940, just about every manufacturer of records used their own standard).

In many cases the phono preamplifier will be supplied with separate “clean” power via a off-board power supply. These units can be linked by means of an umbilical cord joining them, or with a small little wall-wart plug, usually of a lower voltage, e.g. 16V or similar. There are also examples of phono stages that are powered by alkaline batteries to keep interference to a minimum. The Audio Flight Phono shown herewith is a good example of a phono stage with a separate power supply module powered via normal 220V, and the Sutherland Phono stage is a good example of a phono stage with batteries.

There are certain instances in which an amplifier is already equipped with a MM phono input, but the user might want to use a more advanced Moving Coil cartridge. In such cases the MC cartridge would not have the correct loading and gain and the sound would not be very good. There are devices available that can take the input of the MC that is generally very low, boost it to the correct level and then run straight into a MM phono stage. These devices are called step-up transformers and are usually passive or non-powered devices. Although not as popular or even as widely used as phono amplifiers, they are more often than not designed to work with very specific MC units and then optimize the sound of those devices in question to a greater degree. Ortofon manufacture a specific device for the top-of-the-range Ortofon MC cartridges like the A90, the MC Windfeld, MC Jubilee, Rohmann and other ranges like the Cadenza’s. Shown here is the Ortofon ST-70: 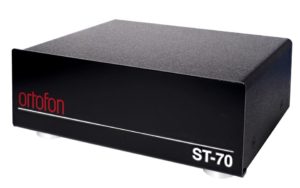 On the most advanced phono preamplifiers there are numerous options that can be set as regards the exact loading and capacitance to fine tune the sound. As the system becomes more advanced, the more the exact parameters of the system need to be optimized. Due to the differences in materials and electrical characteristics thereof the settings can differ. It is quite important to get the correct settings to optimize the performance of the cartridge both in the context of the turntable as well as the system itself. Generally the capacitance and loading will affect the sound as regards whether the sound is bright or dull. This could be due to the equipment interplay, but more likely it will be a result of the wrong loading. Manufacturers usually give a very accurate indication of the recommend loading or capacitance.

The care and work that goes into some phono stages is actually spellbinding as the majority of units usually have a dual mono layout and the individual channels usually have separate circuits, and in some instances also very good shielding from external or individual interference. The build quality and component layout is very often complex and the level of dedication can be clearly seen in the designs. Remember, we are talking of tiny corruptible signals that have to be protected and nurtured as they travel through this maze of electronics.

In the next installment we will be looking at various aspects of where and how the turntable can be placed to have it perform optimally and not be affected by external factors. Stands and supports come in various guises and depending on the circumstances good results can be had from a variety of solutions ranging from the simplest to the most elaborate.

We use cookies on our website to give you the most relevant experience by remembering your preferences and repeat visits. By clicking “Accept All”, you consent to the use of ALL the cookies. However, you may visit "Cookie Settings" to provide a controlled consent.
Cookie SettingsAccept All
Manage consent

This website uses cookies to improve your experience while you navigate through the website. Out of these, the cookies that are categorized as necessary are stored on your browser as they are essential for the working of basic functionalities of the website. We also use third-party cookies that help us analyze and understand how you use this website. These cookies will be stored in your browser only with your consent. You also have the option to opt-out of these cookies. But opting out of some of these cookies may affect your browsing experience.
Necessary Always Enabled
Necessary cookies are absolutely essential for the website to function properly. These cookies ensure basic functionalities and security features of the website, anonymously.
Functional
Functional cookies help to perform certain functionalities like sharing the content of the website on social media platforms, collect feedbacks, and other third-party features.
Performance
Performance cookies are used to understand and analyze the key performance indexes of the website which helps in delivering a better user experience for the visitors.
Analytics
Analytical cookies are used to understand how visitors interact with the website. These cookies help provide information on metrics the number of visitors, bounce rate, traffic source, etc.
Advertisement
Advertisement cookies are used to provide visitors with relevant ads and marketing campaigns. These cookies track visitors across websites and collect information to provide customized ads.
Others
Other uncategorized cookies are those that are being analyzed and have not been classified into a category as yet.
SAVE & ACCEPT